Thomas the Tank Engine made the news again this week, and not in a good way. Thomas is a series of TV episodes about talking steam engines. With faces on them.

A couple of months ago a friend and I were discussing it, so I pulled up something I’d written in grad school about it:

the stories emphasize the importance of responsibility, discipline, order, respect for authority, and work ethic. The highest compliment that [the controller] Sir Topham Hatt bestows, for example, is to announce in utilitarian fashion, “You’re a really useful engine.”

This time it’s a political science professor named Shauna Wilton at the University of Alberta in Augustana who’s built up a head of steam about the program. In a story in the Toronto Star, Wilton says Thomas broadcasts a “conservative political ideology that punishes individual initiative, opposes critique and change, and relegates females to supportive roles.”

“The female characters do tend to be a bit sidelined,” Wilton told the Star. “The show comes out of a particularly historical time period when society was hierarchical and there was a blind following of authority. I want my daughter to think for herself.”

Since then she’s received 30 angry emails she’s received from Thomas fans, who think she’s anti-Thomas. Being an academic, Wilton’s response is nuanced.

“My daughter loves the show and loves playing with trains. There are a lot of really positive themes in Thomas, but parents should be aware of the messages that are there.”

Well, sure, that sounds about right. But The Star needed the a quote from the pro-Thomas lobby, so they hauled Britt Allcroft, the show’s former producer, out of the shed for a helpful non sequitur.

[She] dismissed the allegations back then, saying, “Thomas and friends are neither male nor female. They’re magic.”

“Thomas the Tank Engine is a horrid kids show. If you’re not useful & productive, no one wants u around. Tell your grandparents, kids!” That’s a complaint from my friend, Victorial Dahl.

I told her I had written a grad school paper about Thomas and its pernicious ideology, and then I dredged it up. Below is part of the paper, removed of all the dreary discussion of Louis Althusser, since no one wants to read that–even me, and I wrote it. But the rest is sort of interesting, if you can get past the academese. Here goes:

“Thomas the Tank Engine” is a series of videos based on the Reverend W. Awdry’s Railway Series, a collection of twenty-six books which appeared between 1945 and 1972. The stories, directed at children under the age of six, are based on the adventures of an anthropomorphized steam locomotive named Thomas and his friends. The setting for the series is the mythical island of Sodor, between the Isle of Man and the Cumbrian coast. The railway system is run almost single-handedly by the autocratic Sir Topham Hatt, who seems to bear the burden of doing the scheduling, overseeing the safety of the tracks, and taking care of staffing, including the well-being of the locomotives as persons.

Yet Sodor is not simply a railway placed arbitrarily in the pastoral past. The railway consists largely of steam engines (themselves anachronistic by 1945), which are in competition with both Sodor’s bus system and the “Other Railway,” (i.e., British Rail). A bridge between Sodor and the mainland allows diesels to run on Sodor, and allows legendary steam engines of old to make guest appearances in the book.

The videos consist of short stories, many of which have the feel of a parable. For example, in “Rock ‘N’ Roll,” an engine named Duncan ignores repeated warnings about a dangerous patch of track, and instead rocks and rolls dangerously along—until he derails. When he is put back on the track he suffers the anger of his passengers and the displeasure of Sir Topham Hatt, who disciplines him. Only then is he humbled. 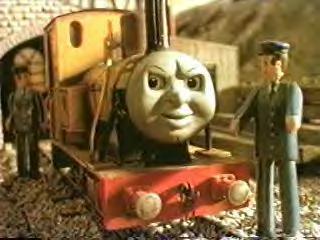 Duncan the steam engine and his punk rock attitude

Though originally meant for young children, Carrington and Denscombe point out that while the engines with faces are likely to appeal to children between two and six years of age, “the average reader of nine would find the text too demanding. The Railway Series is written for adults to read to children. In view of this, it is not surprising to find that the subject-matter is often aimed directly at adults” (quoted in Bruce Carrington and Martyn Denscombe, “Doubting Thomas: Reading between the Lines.” Children’s Literature in Education, p. 46-47).

I chose the Thomas series because the overall tenor of the stories is screechingly conservative, the complete opposite of Bakhtin’s notion of carnivalesque discourse. In almost every story, pride, insubordination, arrogance and caprice are rigorously proscribed.

In Duck and the Diesel Engine, Diesel disregards Duck’s advice about handling “cheeky” and “troublesome” trucks. “We diesels,” he exclaims, “don’t need to learn, we know everything … we are revolutionary” (Carrington and Denscombe, “Doubting Thomas: Reading between the Lines.” Children’s Literature in Education, p.50).

Predictably, Diesel runs into trouble, and is openly ridiculed by Duck and the trucks. Just as character flaws are criticized, the stories emphasize the importance of responsibility, discipline, order, utilitarianism, respect for authority, and work ethic. The highest compliment that Sir Topham Hatt bestows, for example, is to announce in utilitarian fashion, “You’re a really useful engine.”

Even Sir Topham Hatt himself (typically bedecked in a tuxedo and top hat), who embodies authority on the line, is suitably ingratiating to his wife (on her birthday) and the Queen when she visits. And in Toby and the Tram Engine, he is in dispute with a policeman about regulations but finally relents after the police claim “The Law is the Law, and we can’t change it” (Carrington and Denscombe, p. 48).

The premise of the Railway Series is perfect for reinforcing subject and class positions, since if one is a rail engine, one’s relation to one’s means of production is going to be quite simple. Similarly, the division of labor is quite well laid out, since no one can do anyone else’s job. Yet the question of ideology in the series is still interesting. True, engines can pull cars and so cars are inferior. Yet in the stories, the engines have faces, think, speak and feel. Why, then, is the only human in the story the head of the railroad? And strictly in terms of function, he is dependent on engines to move around the island. Why can’t the engines make decisions for themselves? Why do they never question Sir Topham Hatt’s authority? And why do the human workers have less agency than steam engines?

… and so it goes. Plenty to chew on, and I didn’t even mention another facet of the show’s conservatism, that outdated steam engines are the heroes, and newer, presumably more efficient (thus useful) diesels are frequently the bad guys.