I got an email from my dad today. He’s been talking to a grad student in history, and the result is a cool post on the Chicago History Museum’s blog about South Chicago’s steel mill past. 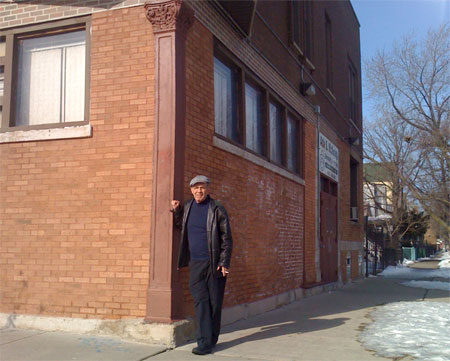 Mike Ochwat in front of the Neighborhood House

Part of the article:

For most of the twentieth century, the Bush was all about 79th street, depending on who you asked, of course. Others might say it was really defined by the old mill gates at 83rd Street on the north and the Elgin, Joliet & Eastern rail tracks on the south. In 1943, when Mike was born, U.S. Steel Corporation ran the massive steel mill that dominated the Bush and employed thousands of Irish, German, Polish, and other eastern European immigrants. During the early 1900s, Mexican immigrants, Mexican Americans, and African Americans had found work there as strikebreakers and also stayed in the area.

You can also listen to him talk about the South Chicago Neighborhood House,  built by Baptist reformers.

I live in Portland, Ore., which is actually farther north than Chicago. In fact, it’s farther north than Toronto—and even than Montreal (though by only a mile or two). But because Portland’s climate is softened by the Pacific Ocean, we get snowstorms once or maybe twice a year, making it a novelty. So when I was in Chicago last week (part I; part II) I found the snowstorm and cold spell somewhat exciting, in the way of a tourist safely ensconced in a hotel room.

On day two it got cold. When I left the hotel the next day, the temperature had dropped into the “bitter” range, and the story on the street had changed. Though Michigan Ave. still had a lot of pedestrians, the cold-weenies like me hoofed it with purpose, instead of dawdling and window-shopping.

Signs also appeared on the sidewalks in front of high-rises: Beware of Falling Ice.

The odds were stacking up against a life of ease: it was bitterly cold; the streets were slick; snow was still blowing; and, if the prospect of freezing, falling to the pavement or getting snow in your eyes weren’t enough, you could got smacked by falling icicles.

Winter: It’s not for sissies.

My hotel was a big box, with the eastern side all glass … much of it single-pane. That meant that if I opened the drapes, I immediately felt the draft. The second night I went out and bought goodies at Trader Joe’s, including a bottle of white wine. I cooled it in my ice bucket at first. Then I realized the huge single-pane windows were great for keeping my bottle of wine cold: I just placed it against the aluminum frame and glass.

The windows were such a bad layer of insulation, there was a sign next to the thermostat that read, “At certain times of year, you may not be able to achieve a comfortable temperature.”

I should have taken a picture of that sign. I’m sure it applies to the city of Chicago as much as my room.

In my last post, I just described raiding the rails in Chicago … something do to once (and hopefully not too much more). Today we’re getting off the train.

Without getting all gushy and lyrical, I love walking in big cities. And by big cities, I mean places like Chicago and Toronto, not necessarily Portland. Portland is a decent-sized city, but its downtown is fairly small: really it’s just a few square miles on one side of the Willamette River.

Chicago, on the other hand, knocks you on your ass with its grandeur. In my walk up Michigan Avenue, I walked by—in no particular order—the Wrigley Building, The Tribune Tower (fascinating and Gothic), the Corn Cob Towers (this explains more), over the Chicago River, past Donald Trump’s latest ego-creation, past the Art Institute of Chicago and their awesome lion statues. A couple nights later, I walked north a few blocks and saw the Water Tower, and Sears Tower. It’s an architectural treasure-trove (
see some pics). Portland just doesn’t compare this way. 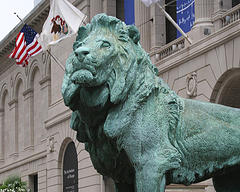 One of the lions. 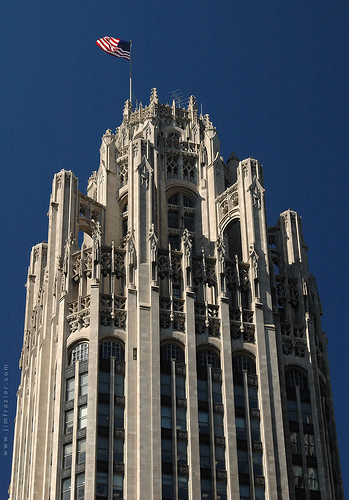 I reached my hotel just as snow flurries started dusting the city. Two hours later, when I went out for dinner, the flurries had become a full-fledged snowstorm, slanting into people’s faces (some carried umbrellas to keep it away), making people squint. As I walked and squinted, it occurred to me that ski goggles would have a practical application—they’d keep the snow out of your eyes, not to mention marking you as a kook (which might deter some of the panhandlers and hucksters).

I went out twice that night, early and late, and saw the progression of the storm. The bridge across the Chicago River was treacherously slick … I followed one woman who wore high-heel boots across the bridge, and she skittered her feet, leaving a trail in the snow like cross-country skis. I mentioned that to her, and she said she did it to keep from slipping.

Umbrellas, shuffle-steps … walking had changed from one kind of an adventure (sightseeing) to another (don’t fall).

I flew into Chicago last Tuesday. Because I was in no hurry, and I’m a fan of public transit, and I could save my company $25 if I didn’t take an airport shuttle, I took the CTA train. Good thing I wasn’t in a hurry: I saw a sign that the train line’s speed was up, from 15 mph to 35. 15 is unbelievably slow. I go 15 mph on my bike!!

While the train follows a freeway for much of the way in, it does so at a slower speed, so I got a lot of opportunity to remind myself just how ugly a northern city is in winter.

The entire palette was dull: grays, browns, dingy blacks, off whites. Even blues and greens looked dull … wisely, because winter is a sloppy season, not many buildings are brightly colored.

The local subway in Chicago is actually elevated—it’s called the “L” for that reason—though it’s been in so many movies (such as the Fugitive with Harrison Ford) that that’s hardly news to many people. But there were a few huge differences between the trains in Toronto (where I grew up) and Portland (where I live now).

First, the “L” is much older than the TTC subway, and the downtown core is surrounded by The Loop. So there’s a loop of elevated track running about 40 feet above the street, making turns right by the windows of office and apartment buildings. Again, I’d seen it in movies, but it had been a long while since I’d actually been peering in people’s windows while riding public transit. I spent an interesting minute watching a woman working at her desk; the train was so commonplace to her, she didn’t pay us any attention. 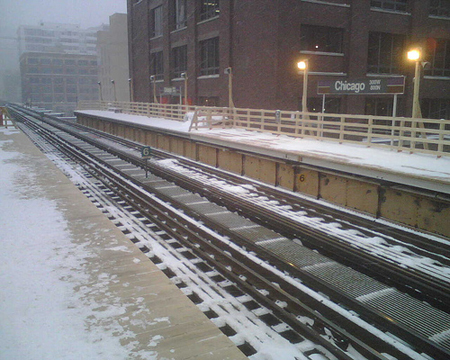 A station on the “L”

Getting off the train was interesting too. It’s about three flights above street level, and the platform is wooden, and everything feels very cadged together and rickety, and on the turnstiles are textured with countless coats of paint.

In the last week I ended up riding the El in Chicago, the MAX in Portland, and the Toronto subway. The “L” (sometime it’s called the El) is by far the oldest, grottiest, quirkiest, slowest, and hardest to navigate. Funny thing was, it was also the most interesting. Then again, I didn’t have to depend on it to get to work.